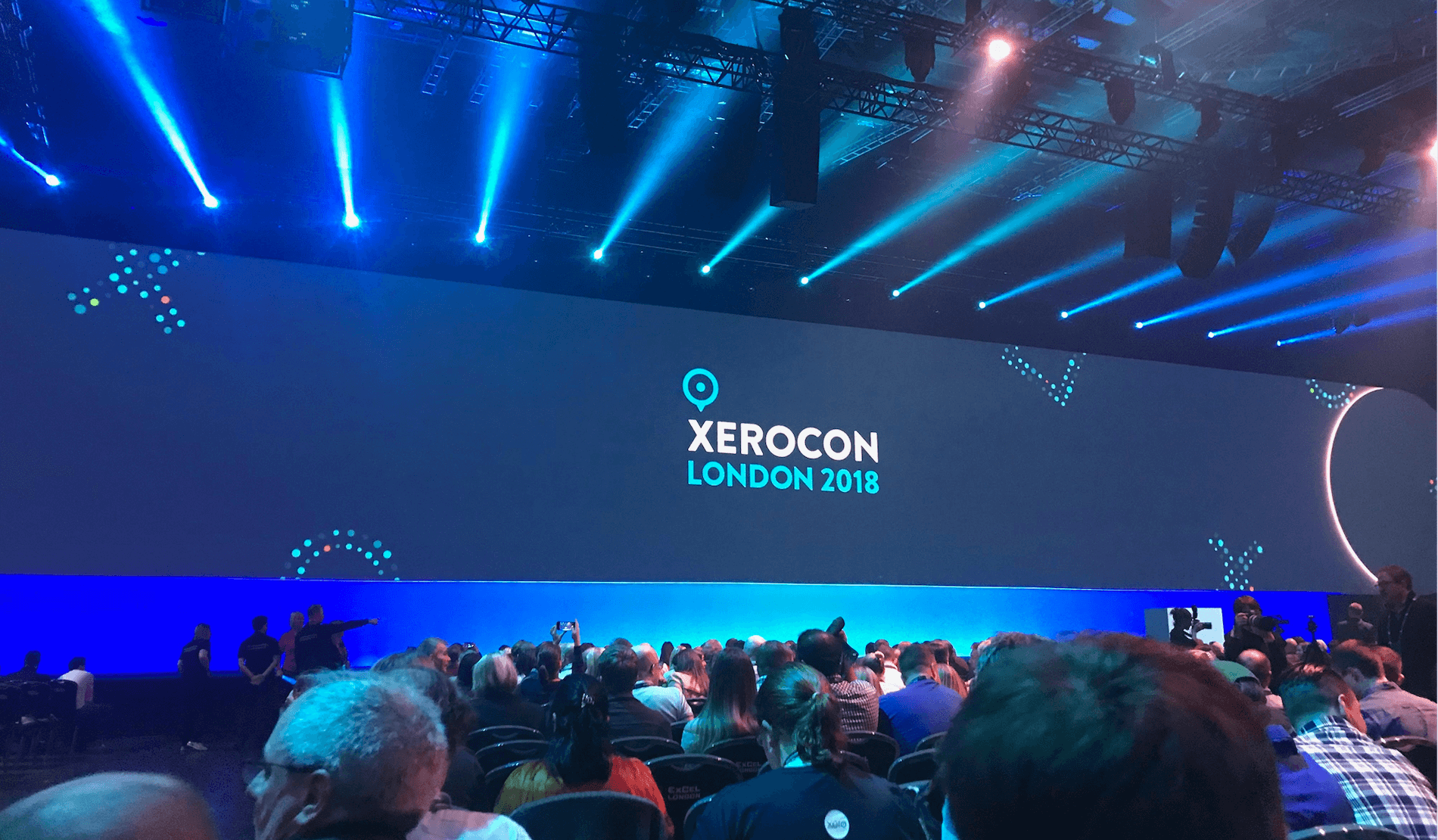 We’ve been excited about Xerocon London 2018 for a long time, and since Brisbane we’ve been itching to get involved in this amazing ecosystem event. 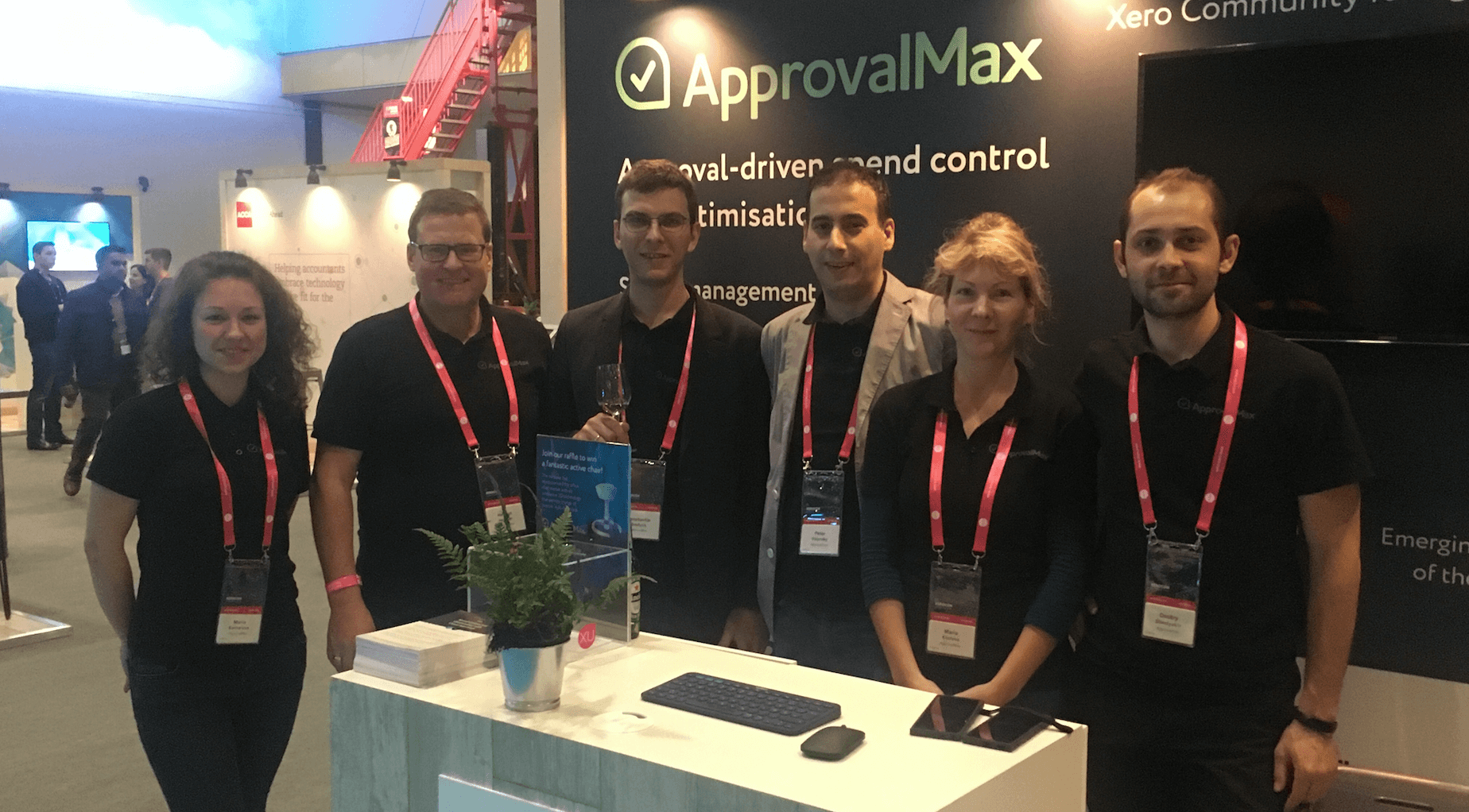 Gary discussed the growth of Xerocon, summed up by a 50% increase on last year to over 3,000 attendees. He emphasised Xero’s focus on small businesses, with the goal of helping them grow and changing people’s lives. He asks, what can be more enjoyable than that?

He lasered in on the automation question: a particularly pertinent issue for finance, accounting, and bookkeeping businesses. Introducing the Human at Heart motto, Gary argued that the world of work is humanising in the face of AI. This is a theme which was picked up later by Xero CEO, Steve Vamos.

Gary swiftly moved onto Making Tax Digital (MTD), which in his assessment is a huge opportunity for accountants in Britain to add value. Over a million businesses in the UK are VAT-registered above the threshold, and will be progressively moving to this new way of working. A whole lot of businesses will be looking for help in the next months, and it’s time to step up.

With this explosion, the role of the accountant and bookkeeper as the advisor is key. We are building awesome infinite relationships. @garyturner at #Xerocon pic.twitter.com/ir7qaciV1z

To wrap up, he focused on how the future of business will be fluid, ever-changing, and with an abundance of short-term companies set up and shut down on a whim. This is an exciting time, needing a vibrant mix of technology and humanity. Finally, Gary announced the acquisition of InstaFile. helping Xero cover every aspect of digital compliance.

Building on Gary’s introduction, Steve zeroed (xeroed?) in on Human at Heart.

He projected a positive outlook on the future, but with the caveat that industry players and their clients must have the capacity to change mindset. At Xero, the ambition is to:

Steve championed the “connected age”, showing that firms must care, connect, and enable. The interactions between small businesses and accountants are critical.

The focus should be on trying new things and being willing to fail. Listen, learn, and improve. He said that a consciousness about the way we work is essential to adapting to this dynamic environment.

It was now time to hear from someone outside the Xero family, and who better to tie in the rich themes of tech, future, and humans than Gerd Leonhard?

He also focused on the importance of consciousness, and making informed decisions about how far we want technology to go. Despite the radical advancement of AI, Gerd highlighted the difference between knowledge, understanding, intelligence, and interpretation.

As humans, we have levels of context and experience which a computer cannot comprehend, and we must make sure that this stays within our control.

To avoid the robot purge of repetitive jobs, we must be creative and thoughtful.

We had a slot at the Silver Stage, and Konstantin did us proud with presentation about how ApprovalMax benefits spend control and optimisation. There was a good turnout, and a lot of interest at the booth after his talk. If you want some insight into some of the themes he discussed, watch this video of our earlier webinar.

Ben was severely injured as a marine, requiring the amputation of his arm and leg. He told his remarkable story in detail, showing through his enthusiasm and bright outlook that positivity in the face of adversity can get you far. His energy was infectious, and the crowd really warmed to his view of the world. His story was inspirational, and put everything into perspective.

Congratulations to all the winners and nominees of the Xero Awards 2018.

We’re proud to work with BDO UK, winners of the App Advisory Firm of the Year, and BluSky, Mid-size Form of the Year. There are so many firms doing an excellent job in cloud accounting, and the Xero Awards highlight impressive progress in the industry.

After the awards, we all popped over to the busy Xero party to let our hair down.

With somewhat fuzzy heads, we set up shop again early on Thursday morning. The range of speakers was as impressive as the day before.

We always enjoy Nick’s talks, and this one was no exception. This mainstage event was focused on app advisory and “making business digital” with the Xero app marketplace.

For app advisory, there are common barriers: overwhelmed by choice, not sure where to start, and not sure how to realise value. @nickhouldsworth showed how Xero intends to help. #Xerocon2018 pic.twitter.com/rq573OHT6N

Nick took us through the history of the iPhone as a shining example of how it changed everything. There are parallels with when Xero allowed APIs, opening the floodgates for high-quality partner apps to add value to customers.

In the early days there were just a handful of apps, but the growth has accelerated to over 700 now operational in the Xero ecosystem. Nick cited Bill Gates and his view that “a definition of a platform is when third-party developers build things that you never expected”.

In that sense, Xero has become a true platform.

As demonstrated by the photo below, “good things happen when small businesses and accountants connect on the Xero platform.” 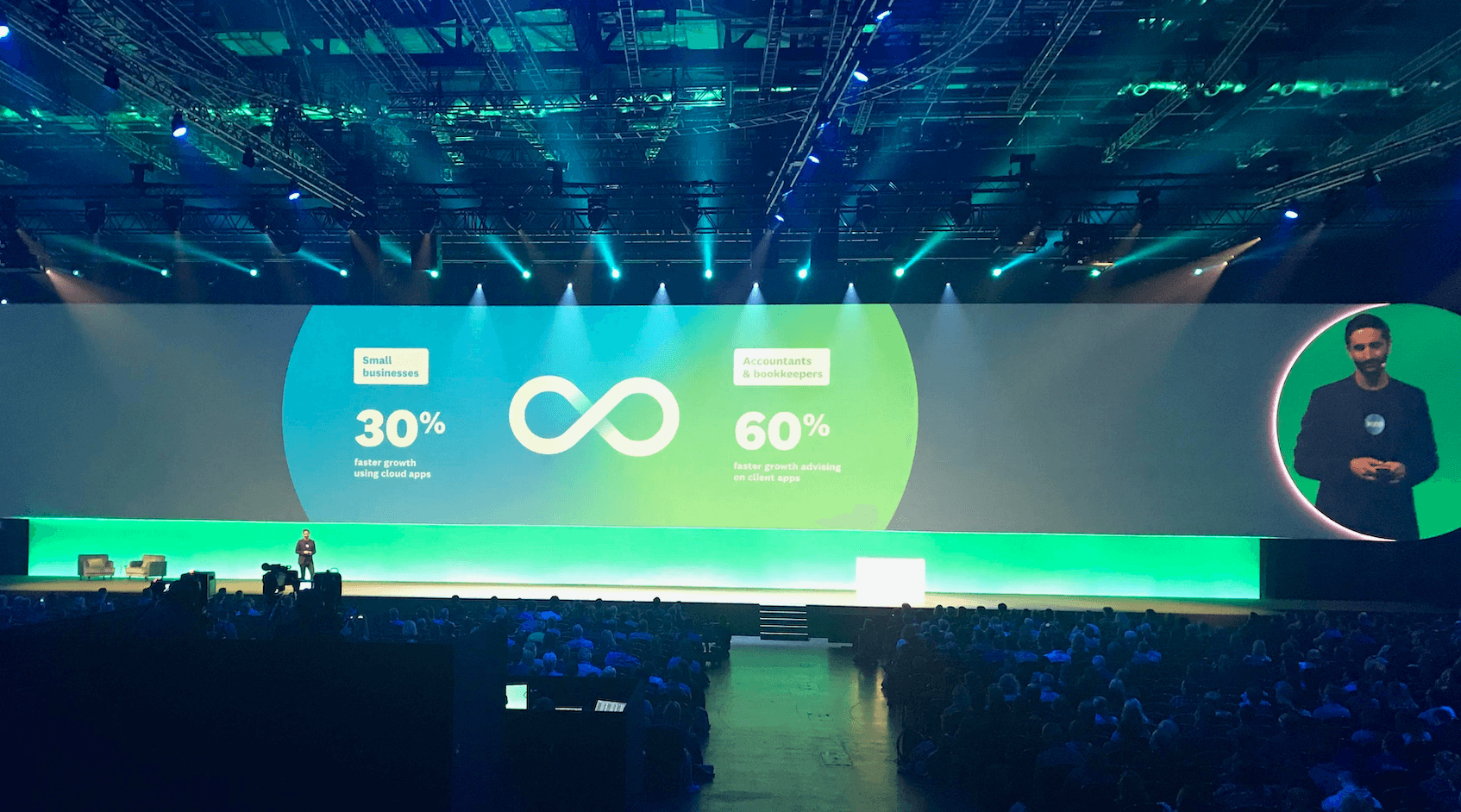 The true value of cloud apps and advisory services.

Louise Minchin enjoyed a relaxed chat with Xero’s non-exec director, Rod Drury. After stepping back from his executive role in March 2018, Rod has gained considerable perspective on the company, industry, and the landscape in which we all operate.

Louise asked Rod about his proudest achievements, and his response was focused around the vibrant and growing community that Xero has cultivated. According to Rod, he takes great pride in seeing new recruits excel, and has the deep honour of witnessing how Xero changes the lives of small business owners and their teams.

With regards to the future, Rod said that we have the chance to define this industry, and that we must grab it with both hands. This global family will stick together to make a difference.

This panel discussion was hosted by Paul Bulpitt, and featured lots of key advice and real-world stories about growing a practice with digital. The three panellists are featured in the Pacesetters book.

In this discussion, they talked about many aspects of growing a practice. There was a focus on the importance of people, highlighting the benefit of bringing apprentices in. The energy, knowledge of tech, and openness to changing processes is very useful for growing firms.

There was a big emphasis on avoiding “growth for the sake of growth”. Instead, practices must aim to grow efficiently and sustainably. Scaling in the right way is paramount. Furthermore, firms must understand that this never happens overnight.

In terms of scaling into advisory services, the advice was to listen to clients rather than to push a product. Go beyond compliance to offer support and advice.

The biggest tip is to dive in, go full throttle, and commit to learning lessons quickly.

This discussion was about optimising cash flow forecasting, focusing on Fluidly and other apps. ApprovalMax was mentioned as an approval solution for companies that need to streamline complex approvals. 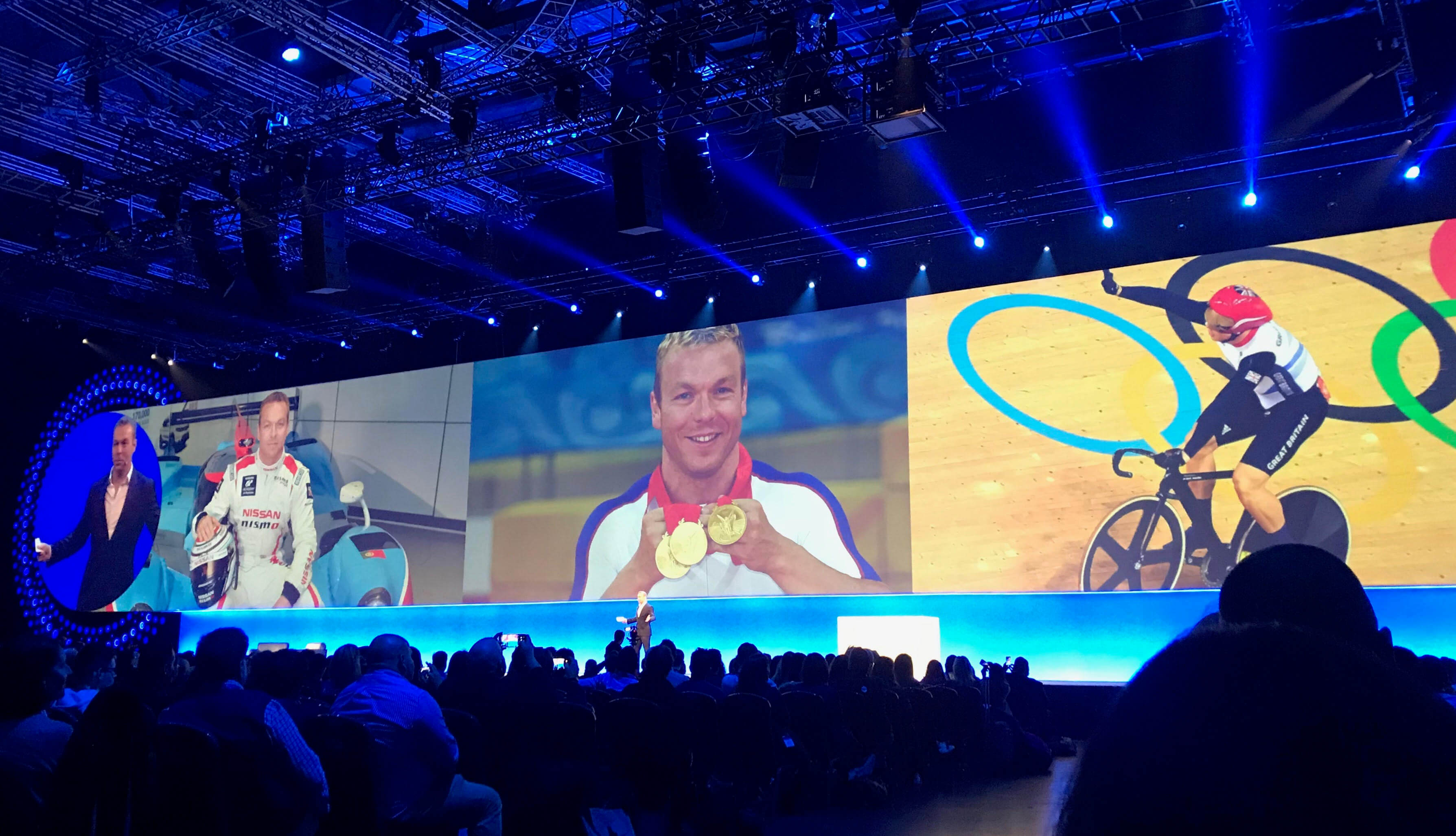 As one of the planet’s finest ever cyclists, Sir Chris Hoy knows a bit about pushing himself to the limit! As the final keynote in this year’s Xerocon, we were excited to hear from such a legendary sportsman.

After an impressive highlights reel, Sir Chris introduced his three main career lessons. These were applied to his life and his sport to optimise performance for the best outcomes:

We’ve had a fantastic time at Xerocon London 2018. Thank you to everyone who made such a seamless event possible, and looking forward to seeing you all again soon!